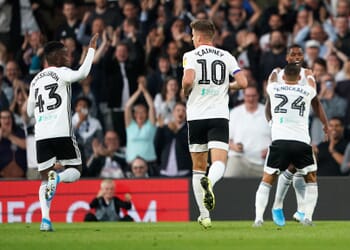 There’s a West London derby at Craven Cottage on Friday night and this could feasibly be the Championship play-off final in May, with both teams enjoying a strong season which has them looking like a lock for a top six finish at the moment.

Fulham are in third place and will still be targeting automatic promotion, although the gap between the Cottagers and second-placed West Brom is six points and Scott Parker’s side would need to embark on a winning run to overhaul the Baggies or Leeds.

Brentford sit four points behind in fourth place. They come into this match off the back of thrashing Sheffield Wednesday by a 5-0 scoreline and the Bees have now scored twenty goals in their previous eight encounters.

However, Thomas Frank’s side can’t be trusted on the road due to the fact that they have lost eight times this season, although an expansive style of play means that we can expect them to find the net for this Friday night encounter.

Similarly, Fulham have now scored in seven of their previous eight games and have the division’s leading scorer within their ranks. Aleksandar Mitrovic has been relatively quiet of late although he still has 31 goals for the season and should prove a handful in this clash.

The Serbian is in a goals race against Ollie Watkins who was surprisingly not among the scorers when Brentford dished out that hammering to the Owls, although Bryan Mbeumo was on the scoresheet again and the talented Frenchman is proving to be an inspired signing for the Bees.

Both teams can feel relatively confident of getting a play-off spot as a bare minimum this season and we can therefore expect the handbrake to be off when they clash in front of the Sky Sports cameras, with the “Yes” option on the Both Teams to Score market making the most appeal.

When is Fulham vs Brentford being played?

What is the Fulham vs Brentford H2H record?