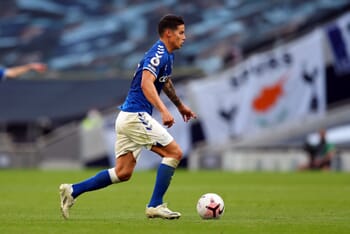 Everton began the season with a win at Tottenham despite being betting outsiders although our prediction is that Carlo Ancelotti will rest his entire first team for the arrival of League Two opponents on Wednesday night.

While James Rodriguez, Allan and Abdoulaye Doucoure combined to give the Toffees a new and improved midfield, the trio are likely to be given the evening off, although perhaps Ancelotti will select one or two first-teamers on the bench just in case of emergency.

Are Everton Too Short in the Betting For EFL Cup Clash?

Everton are still ridiculously short in the betting to win this EFL Cup encounter against a Salford City plying their trade three tiers lower in the English football pyramid, although The Ammies now look like one of the stronger League Two sides and it wouldn’t come as a surprise if Graham Alexander steers the team to promotion this season.

Jason Lowe, Bruno Andrade and Ian Henderson were all eye-catching signings for City, with the latter taking just two minutes to open his account and we’re expecting the visitors to put on a decent showing at Goodison Park.

Everton will be showing plenty of changes and it’s an opportunity for Moise Kean to impress the manager and the supporters, while Tom Davies, Gylfi Sigurdsson, Jonjoe Kenny, Bernard and Theo Walcott also likely to be involved, while goalkeeper Joao Virginia can get a chance to shine between the sticks.

Our prediction is that the Premier League side might look typically disjointed considering how many changes will be made to the starting line-up, while Salford don’t have the luxury of being able to rotate the team and there’s the obvious motivation of potentially pulling off an upset.

We’re going to tip the outsiders with a two-goal advantage which means a defeat by a two-goal margin will see money back, while anything better and the bet wins.