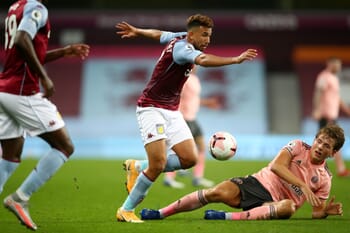 Aston Villa and Everton might well play out a high-scoring Premier League clash on 13 May, with Dean Smith’s side having taken the lead against Manchester United on Sunday before losing 3-1 to the Red Devils.

The Midlands side will be missing the suspended Ollie Watkins for this clash against the Toffees, although they are still capable of scoring against opponents who need to play attacking football to get the wins which might give them a chance of landing a top six spot.

The fact that Jack Grealish is absent from proceedings means we can’t be totally confident in the home team when it comes to clashing with their Merseyside opponents, although it should now be noted that there has been BTTS Yes when it has come to all of their past six matches.

Villa recently left Goodison Park with three points after claiming a 2-1 win and Bertrand Traore returned to the scoresheet recently when bagging a brilliant goal against Manchester United, while John McGinn produced a quality performance in the midfield department.

The Toffees Unpredictable in the Premier League

Carlo Ancelotti’s team have won ten of their sixteen away encounters in the English top flight this season, with the Italian having engineered some of the best performances on the road this term and it appears that the Toffees will line up with a 3-4-3 formation in this game.

Gylfi Sigurdsson has come into the team to flank Dominic Calvert-Lewin along with Richarlison and the best way to bet on Everton matches is to also anticipate an attacking approach leading to an open game of football.

It’s getting towards the end of the season and for that reason, we think both of these mid-table sides could end up playing with the handbrake off.