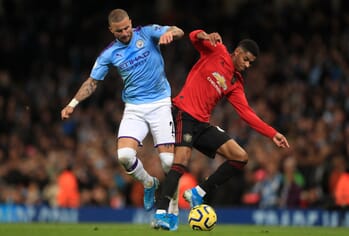 Manchester City have a busy schedule of fixtures during April as they look to challenge for an unprecedented quadruple although they still need to seal the deal as far as the Premier League title is concerned and have a great opportunity to land three points on 21 April.

Pep Guardiola’s side are huge betting favourites to get the better of an Aston Villa side who are missing Jack Grealish, with our prediction being that the Citizens will win this encounter and also keep a clean sheet at Villa Park.

The Best Way to Back Man City Against Villa

Manchester City might be trading at a prohibitive price to get the better of Villa on the Full-Time Result betting market, although there’s a way of backing them at odds-against if you fancy them to secure a clean sheet and we think the defence might hold firm in the Midlands.

Our main betting tip for this Premier League match is Man City to win and “No” on the BTTS betting market, meaning we want the champions-elect to win to nil and they can usually be relied upon to keep things tight.

After all, the Citizens have only conceded twenty-three goals all season and five of those came in one game against Leicester, with the majority of their victories being bloodless ones where the opponents have failed to lay a glove on them.

Dean Smith has done really well with his Aston Villa team this season and it looked as though they might challenge for the European spots at one point, although things have been trickier in recent weeks.

There has been just one win in the previous six games and Villa failed to find the net against Sheffield United, Wolves and Tottenham recently, with Jack Grealish missing and our tip will be for City to enjoy a bloodless victory.