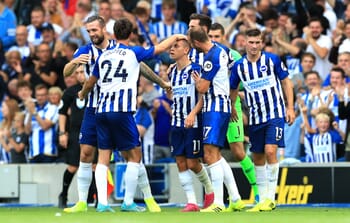 Brighton & Hove Albion might have produced several bright performances under Graham Potter this season although the plain fact is that the Seagulls are only four points above the relegation zone.

Wins have been thin on the ground and Albion have triumphed in just six of their twenty-seven clashes in the Premier League which means it’s hard to feel confident taking the even money that they topple Crystal Palace on Saturday.

Brighton have only won four of their thirteen matches at the AMEX Stadium and they have failed to win any of their last eight games, with a spate of draws meaning that they continue to tread water above the drop zone.

Considering there are some difficult fixtures ahead, a victory here would give them some welcome breathing space although Crystal Palace are an awkward side to be facing and there’s the extra spice of a derby atmosphere between these two rivals.

The Eagles are five points better off than their opponents after beating Newcastle last weekend and that ended their own eight match winless run which threatened to see them dragged into a dogfight.

Roy Hodgson’s team are generally involved in low-scoring tussles due to the fact that their defence is probably the strongest department and there have been the perennial issues when it has come to finding the net this term.

When the teams clashed in December, the game finished in a 1-1 scoreline and it’s easy to see a similar outcome this time around, with no quarter likely to be given by either side.

None of the attacking players on the pitch have shown themselves to be prolific in any capacity this season, with the visitors likely to plump for Christian Benteke and Jordan Ayew, while Brighton will hope that Neal Maupay’s first goal in ten matches kickstarts something for the Frenchman.

All things considered, let’s play things safe and go for a low-scoring encounter in Sussex.

When is Brighton vs Crystal Palace being played?

Brighton vs Crystal Palace will be played at 12:30 GMT on Saturday 29 February 2020 at American Express Community Stadium.

What is the Brighton vs Crystal Palace H2H record?