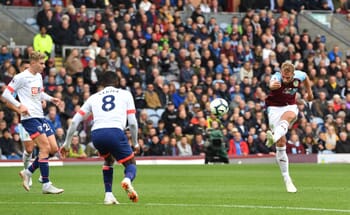 There’s little doubt that Burnley had a wobble at the beginning of last season and there’s also little doubt that the Clarets’ poor form was directly attributable to the fact that they were engaged in a short-lived Europa League campaign.

While Sean Dyche tried to mask over his team’s shortcomings, this season’s performances to date have indicated the capabilities of this team when they’re not playing in Europe and they nearly scalped a tired Wolves team at Molineux, with the Midlands team this season having to contend on two fronts.

The Lancashire side have claimed four points from their opening three matches and they’ve not been easy fixtures, with Burnley beating Southampton by a 3-0 scoreline before a narrow 2-1 defeat at the Emirates and then a 1-1 draw against Wolves.

Now comes a clash against Liverpool although Dyche won’t be fearful about meeting a team where there are low expectations as far as Burnley are concerned, with the home side capable of running the Premier League title contenders close.

Ashley Barnes has had a particularly eye-catching start to the season, with the Englishman scoring four goals in his first three matches and he’s a physical player who makes life difficult for opponents.

Chris Wood is likely to operate in attack alongside him and Liverpool might have their work cut out in this clash, with the Reds looking to continue their 100% start to the Premier League season which has already seen them steal a slight march on Manchester City.

There have been wins over Norwich, Southampton and Arsenal, although Jurgen Klopp’s side were only able to beat the Saints by a single goal and any victory at Turf Moor could be achieved by a similarly slender margin.

For all the attacking quality of that famed front three, the visitors have failed to keep a clean sheet so far and look more vulnerable without goalkeeper Alisson who continues to be sidelined with injury.

Therefore, we will get with Burnley on the Asian Handicap and hope that they can give their high-flying opponents a good run for their money.

When is Burnley vs Liverpool being played?

What is the Burnley vs Liverpool H2H record?