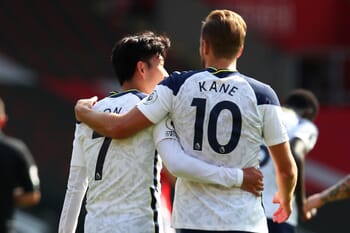 Tottenham Hotspur have been Jekyll and Hyde this season as far as their home and away form is concerned, with Spurs reserving their best performances away from White Hart Lane and our prediction is that they will secure three points from this match at Turf Moor.

Jose Mourinho is focused on his team challenging for the EPL title this season and early signs are promising, with Son Heung-Min and Harry Kane combining to devastating effect in several matches already and they helped the north London side race into a three-goal lead against West Ham last weekend.

We’re Predicting Kane and Son to Shine for Spurs

We are tipping the pair to cause major problems to a Burnley side who have started the campaign slowly despite some promising form towards the end of the 2019/20 season, with Sean Dyche unable to bolster his squad as he would have liked.

The Clarets have just one point on the board after a goalless draw at The Hawthorns although they’re big betting outsiders to claim their first victory of the season on Monday night and it’s hard to see how they will approach this match.

Keeping things tight might seem difficult against opponents who scored five at St Mary’s and then six at Old Trafford, with Gareth Bale slowly getting up to full fitness and the Welshman could be set for another cameo performance here.

Bet on Tottenham to Beat Burnley in EPL Clash

While there are still defensive issues to correct, Pierre-Emil Hjobjerg has slotted into the team seamlessly and Burnley have managed just one goal in their past four matches despite Ashley Barnes returning in attack alongside Chris Wood.

We’re happy to keep things simple for this match and simply bet on Tottenham to win the game in ninety minutes. They have the squad depth to cope with ongoing Europa League engagements and we’re expecting to see more goals for the visitors.

When is Burnley vs Tottenham being played?

What is the Burnley vs Tottenham H2H record?