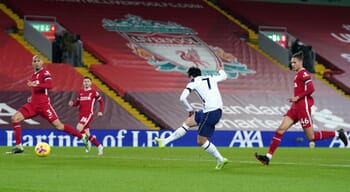 Tottenham Hotspur look highly unlikely to qualify for the UEFA Champions League this season, with Jose Mourinho having recently left the north London club and it’s now down to Ryan Mason and his coaching staff to steer the ship until the end of the campaign.

The early signs suggest that Mason is going to adopt a more attacking approach than his predecessor, with Spurs clashing with Leeds at Elland Road in what could be a highly entertaining game as Marcelo Bielsa’s side look to get back on track.

Although Tottenham lost the EFL Cup final against Manchester City, a slender 1-0 reverse might act as a confidence boost considering that the underdogs managed to keep their opponents at bay for the majority of the encounter.

Previously to this, Spurs showed tremendous character to come back from a goal down to overcome Southampton and there’s always likely to be goals when Harry Kane, Gareth Bale and Son Heung-Min are on the pitch.

It should be noted that Bale plundered a hat-trick against Sheffield United last weekend and it appears that Mason is getting a tune out of the team’s attacking players as the season draws to a close.

Leeds Limping Towards the Finish Line

It doesn’t appear that Leeds have a huge amount of motivation for their remaining games of the season and last weekend’s 2-0 defeat at Brighton suggests that they are there for the taking ahead of a clash against Spurs.

Patrick Bamford has now gone five games without a goal and the team have only found the net once in their past three encounters, with Tottenham likely to take advantage and some punters might want to bet on Spurs to win and both teams to score.

However, our main betting tip is the visitors to win the game on the Full-Time Result betting market.