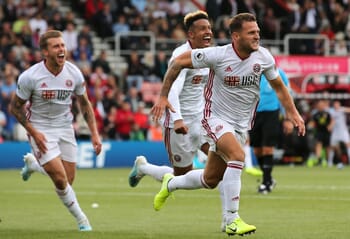 Sheffield United have made a solid start to life in the Premier League after bagging four points from their opening two matches. The Blades scored a late equaliser at the Vitality Stadium before landing a home victory over Crystal Palace.

Chris Wilder steered the Yorkshire outfit into the top flight by playing innovative football and they’re sure to give Leicester a decent match, with the manager operating with three centre-halves and largely trusting the players that helped them land promotion.

On-loan Manchester United keeper Dean Henderson looks like a safe pair of hands, while Luke Freeman’s performance against the Eagles was particularly impressive and it was his driving run which effectively led to the goal.

We’re confident that United can add to their points tally in this clash, with Leicester having struggled to deal with Chelsea’s early onslaught at Stamford Bridge last weekend before finishing strongly to land a 1-1 draw.

The Foxes could have ended up winning the game, although there were some anonymous performances in the form of Jamie Vardy and Ayoze Perez, while James Maddison missed some good chances.

There’s also the nagging suspicion that the defence just isn’t as tight without Harry Maguire at the back and this could easily end up being Leicester’s third consecutive draw of the campaign.

Brendan Rodgers will be concerned that his team haven’t been finding the net more regularly, with that Wilfried Ndidi headed goal from a corner being the only time that the Midlands side have been on the scoresheet thus far.

When is Sheffield United vs Leicester being played?

Sheffield United vs Leicester will be played at 15:00 GMT on Saturday 24 August 2019 at Bramall Lane.