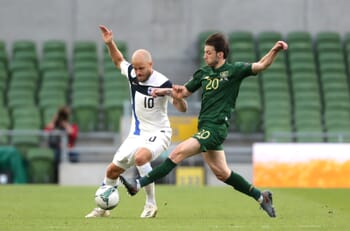 The Republic of Ireland still have a chance to qualify for Euro 2020 although Stephen Kenny’s side will have to do things the hard way after failing to make it to the deferred finals automatically, with two away victories required to be lining up next summer.

Our Prediction is That Republic of Ireland Will Struggle for Goals

Kenny took charge of the national team in April 2020 and the early signs have not been particularly encouraging, with the Republic earning a 1-1 draw away to Bulgaria before losing at home to Finland, although at least the boys in green looked suitably robust against both teams.

Our prediction is that they’ll have a stout defence for this Euro 2020 qualifier in Bratislava, with Seamus Coleman and Matt Doherty class acts in the full-back positions, while John Egan, Enda Stevens and Shane Duffy all offer plenty of stability as centre-halves, although the big problem is a lack of goals in the team.

Reasons for our Slovakia vs Ireland Betting Tips

Veteran striker Shane Long has never been prolific for club and country, with a lack of attacking firepower one of the reasons why our tip is to go for Under 2.5 Goals in this clash. Brighton’s Aaron Connolly could be a star for his country, although it’s asking a lot of the 20-year-old to shine on the big stage here.

Slovakia haven’t looked particularly impressive and we wouldn’t consider betting on them after they were turned over at home to Czech Republic in the Nations League before a 1-1 draw away to Israel.

Martin Skrtel is no longer the steadying presence in central defence and we’re not sure that Marek Hamsik can continue to provide the sort of inspiration that the team need, while this is another side who look short of goals.

Considering what’s at stake, it could be that one goal settles this contest and we’re happy to play things relatively safe and bet on Under 2.5 Goals to be scored altogether.