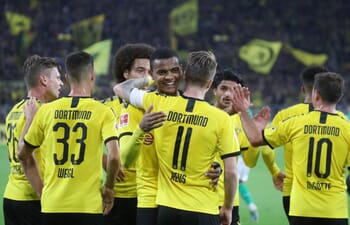 The 26th matchday of the 2019/20 German Bundesliga season looks set to take place on the 15/16/17 May, with the highlight match likely to be the clash between Borussia Dortmund and FC Schalke.

Dortmund are generally box office whenever they take to the pitch, although the fact that football-starved fans get the chance to watch live streaming of their clash against Schalke will be an extra special treat.

After all, it’s been two months since we last saw top-class European domestic action and we are now treated to the prospect of Borussia Dortmund clashing with Schalke in the Revierderby, even if the match will be played behind closed doors.

It will be an eerie prospect for the players considering that the Westfalenstadion usually produces a cauldron of noise, especially for the visit of the team’s arch rivals, although Lucien Favre will hope that his team can continue their high-scoring ways.

Dortmund have scored an impressive 68 goals in 25 league matches and they have been especially devastating on home soil, while the signing of Erling Braut Haland has only made them more of an attacking menace.

The Norwegian was ripping it up for FC Salzburg in the early part of the season before doing the same thing for Dortmund and he’s already notched twelve goals for his new team in a short space of time.

As for Schalke, they will be pleased to land a point from this match and their away form hasn’t been particularly impressive this season, with just four wins landed from twelve trips on the road.

There have been four draws and four defeats, with a lot of the games proving to be low-scoring and it will be interesting to see how the visitors approach this clash.

We can expect plenty of mistakes considering that it’s been a long time since these teams played a competitive match and the players have had to train by themselves for a long period of time before getting the chance to resume training.

However, Dortmund have won 75% of their home games this season and we can expect that sort of statistic to translate into another victory, while the fact that they have conceded ten goals at home proves that they’re fairly mean at the back.

This is not a team who put special focus on keeping clean sheets and the primary objective will now be to win enough matches to put pressure on leading team Bayern Munich who went into lockdown enjoying a four-point cushion over their nearest rival.

Expect Jadon Sancho to continue playing a starring role for the home team, with the England winger proving that he can add goals to his all-round game, while Axel Witsel is also having a campaign to remember.

Despite the fact that the reverse fixture ended in a goalless draw, we are going to go for a Dortmund win and both teams scoring, with the lockdown actually coming at a good time for a Schalke team who were thrashed 5-0 at home to Leipzig shortly before the lockdown.

When is Borussia Dortmund vs Schalke 04 being played?

What is the Borussia Dortmund vs Schalke 04 H2H record?