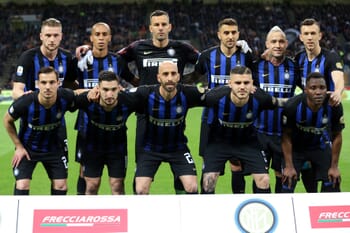 Internazionale still have an outside chance of landing the 2019/20 Serie A title this season, with Antonio Conte’s side sitting third in the table with a game in hand on Juventus and Lazio.

The Nerazzurri will hope to make a flying restart to the campaign and get back in the conversation as far as the Scudetto is concerned, with the bookies making them a very short price to claim a victory over a relegation-threatened Sampdoria side.

Inter have home advantage although it remains to be seen whether playing at the empty San Siro Stadium will provide any real benefits, with the Milan side having won a modest seven games out of twelve at this ground so far.

Indeed, they have been more clinical away from home thanks to nine wins from thirteen matches and clearly have had issues breaking down stubborn defences, although they will be confident of beating Samp for the second time this season.

Inter ran out 3-1 winners at the Stadio Luigi Ferraris earlier this season, with the team looking to bounce back from defeats against Lazio and Juve before the lockdown which saw them lose significant ground on the leading teams.

As for Sampdoria, they are just one point clear of the relegation zone although Claudio Ranieri has done a reasonable job of resurrecting their fortunes since he took charge at the beginning of November.

Before the lockdown, the Blucerchiati claimed two wins in three matches although a gung ho approach also saw them ship plenty of goals, with Fiorentina running riot when winning 5-1 and that came between the victories against Torino and Verona.

We can therefore be fairly confident that Internazionale will win this clash and think about how to back them at a bigger price than the Full-Time Result odds. A good way forward could be to go for the home win and both teams to find the net.

Samp scored in six of their seven games before the break and might well look for an attacking approach in a game where they are not expected to claim anything.

When is Inter Milan vs Sampdoria being played?

Inter Milan vs Sampdoria will be played at 20:45 GMT on Sunday 21 June 2020 at Giuseppe Meazza Stadium.

What is the Inter Milan vs Sampdoria H2H record?

What is Sampdoria’s most recent form?

What is the predicted Sampdoria line-up?