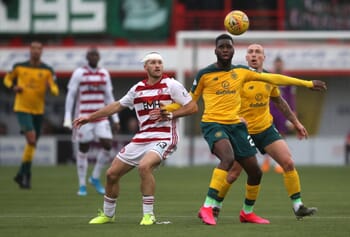 Celtic are massive betting favourites to win their 2020/21 Scottish Premiership opener against Hamilton and it’s hardly a surprise considering that Neil Lennon’s side rarely put a foot wrong last season.

The Bhoys won their ninth consecutive title with plenty to spare and will look to make a strong start to the new campaign as they go in search of ten on the bounce, having won fourteen of their fifteen matches at Celtic Park last term before the season was brought to an abrupt halt.

However, you won’t get rich backing Celtic at odds of 1/10 and our betting tip is actually for Hamilton to produce a solid performance in this tricky first match, with the visitors having largely acquitted themselves well against the Scottish champions last term.

The Accies did lose all three matches against their illustrious opponents, although they were only beaten 1-0 at New Douglas Park back in September before coming desperately close to landing a point at Celtic Park in early December only to lose 2-1.

While the latest meeting between the two teams saw Celtic run out 4-1 winners, Hamilton repeatedly demonstrated their ability to run a tight ship on the road and our prediction is that they will make life difficult for a ring-rusty home side who will just want to get three points on the board.

Lennon’s side did rack up fifty goals in fifteen home matches last season, although there were several occasions where the visitors to Celtic Park were able to keep the scoreline down, with Odsonne Edouard the obvious danger man for the Scottish champions.

The striker was top scorer in the Scottish Premiership last season and it’s rumoured that Arsenal are interested in landing his signature, although the French Under-21 international remains north of the border now and he’s the man that Hamilton will be looking to stop.