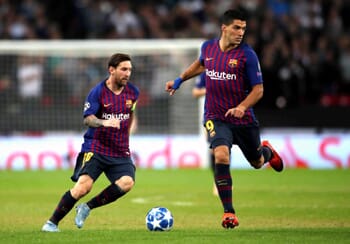 You have to argue that the lockdown came at a bad time for RCD Mallorca considering the relegation-threatened side had collected seven points from their previous four matches.

After finishing fifth in the Segunda Division last season and emerging into La Liga through the play-offs, it was always going to be a tall order for Vicente Moreno’s side to stay in the top flight although they’re just a point away from safety.

It has been the team’s form at the Estadi de Son Moix which has been the driving force of the season, with Los Bermellones posting very respectable stats of 6-2-6 and that includes conceding just fourteen goals in those games.

Perhaps they will regard this as a good time to be facing Barcelona who might not be completely up to speed after such a big break from their last game, although Bayern Munich and Borussia Dortmund were able to record comfortable opening wins in the Bundesliga.

Barca have a two-point advantage over Real Madrid with eleven games to play and their destiny is therefore very much in their own hands right now.

Quique Setien’s side haven’t been particularly convincing on the road this season, winning just five of their thirteen matches although this fixture suddenly becomes more winnable now that they are playing in an empty ground.

As always, the Catalan side always have a lot of fixtures to fulfil during the course of the season and the players will have benefitted from a break which will have lasted three months, meaning it’s essentially like starting a new campaign.

It’s possible that Luis Suarez will be involved after nearing a return following a knee injury lay-off, while Lionel Messi and Antoine Griezmann will look to continue where they left off.

Frenkie de Jong will also look to up his game following that £67 million move from Ajax, with Barcelona backed to enjoy a flying start and win the game.

When is Mallorca vs Barcelona being played?

What is Mallorca’s most recent form?

What is the predicted Mallorca line-up?