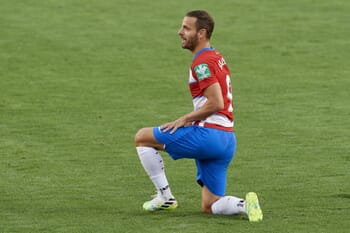 Manchester United are the 2.50 favourites to win the UEFA Europa League and it’s hardly a surprise considering that the Red Devils sit second in the English Premier League and have a strong squad of quality players.

They have drawn Spanish opponents in the quarter finals of the competition, with Granada clearly dangerous in the sense that they dumped Napoli out at the last 32 stage of the tournament before overcoming Norwegian club Molde who used to be managed by Ole Gunnar Solskjaer.

The two teams will firstly meet at the Nuevo Los Cármenes on 8 April and it’s worth bearing in mind that Diego Martinez’s side have won eight of their fourteen matches on home soil this season, with our prediction being that they’ll be stubborn opponents against the Red Devils.

At the time of writing, Granada have won their last four home matches in all competitions which gives us the confidence to make a betting tip that they will prosper with a one-goal advantage against a team who recently looked wobbly against Leicester City when losing in the FA Cup.

Can Manchester United Oblige at Odds-On in the Betting?

Solskjaer’s team are trading at odds-on to win this quarter final first leg clash, although they don’t actually have to win this game and will be wanting to go out and get away goals, potentially at the expense of conceding them at the other end.

The game comes after a clash against Brighton and before a difficult tie away to Tottenham, with the United squad likely to be rotated as a result and there’s no getting away from the fact that there’s an over-reliance on Bruno Fernandes to make things happen.