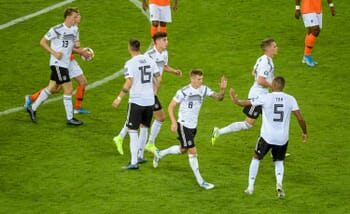 Germany enjoyed a 2-1 win at the NSC Olimpiyskiy Stadium in Kyiv on Saturday night and our prediction is that they’ll land another victory when they clash with Switzerland at the RheinEnergieStadion in Cologne.

Joachim Low’s side were comfortable victors against the Ukraine, with Matthias Ginter and Leon Goretzka scoring the goals that put them into a 2-0 lead before a late penalty made things a little nervier than they needed to be.

Our Prediction is that Germany Will Beat Switzerland

Nevertheless, this German side look fairly robust and had the game under control at the weekend, with Chelsea pair Kai Havertz and Timo Werner expected to return to the starting lineup for this clash and we’re going to bet on Die Mannschaft to win the game.

We might also see Julian Brandt and Emre Can line up from the start, with our tip being for Germany to win the game without conceding against a Switzerland side who are now sitting bottom of their Nations League group.

The Swiss are not a bad team although they have been short of goals which is often a common complaint for Vladimir Petkovic’s side and we’re not expecting them to see much of the ball in this clash.

Bet on Germany to Keep a Clean Sheet

There were few chances carved out at the Alfredo Di Stefano when losing 1-0 to Spain on Saturday and just one shot was recorded on target for a Switzerland team who played with five at the back and spent large parts of the game camped in their own half.

Germany might have to wait for the breakthrough considering that the Spanish benefitted from a defensive mistake earlier in the match, although Low’s side are now starting to look more like the team that conquered the world in 2014 and less like the side who famously blew up at the 2018 World Cup.